Introduction of Shinsenkyô in Hakone Introduction of Shinsenkyô in Hakone

The Shinsenkyô in Hakone is a garden with great significance, which Meishu-sama said, “Japan is the garden of the world and Hakone is the garden of Japan. Gôra is the garden of Hakone. It follows then that Shinsenkyô, being at the heart of Gôra, is indeed the very center of the world”; “The aim of this sacred garden is bringing out the sense of beauty inherent in human beings, naturally improving their characters and integrity, and cleansing the stains of souls through the eyes of people who view it.”

At the chaotic time during and after WWII when many Japanese people became exhausted and lost confidence, Meishu-sama, who wished to heal people from their soul and guide them to happiness, completed the construction of Shinsenkyo in 1953 in order to show the model of the ideal world of the future. It is the prototype of the “world of beauty” in which the natural beauty and manmade beauty are integrated, and the prototype of paradise on earth free of illness, poverty and conflict.

For this construction, many followers and others who shared the same goal participated. The wonder of the garden composed of outcropping boulders; exquisite taste of garden created by maple trees and moss; architecture best using the characteristics of sukiya-zukuri; the view of the garden which became one with Hakone Mountains: Within a space of approximately 3.1 acres, a scenery just like a painting is condensed.

In the Evaluation and Research Report for the Preservation of Shinsenkyô, it is indicated, “Shinsenkyô is an ultimate world of beauty of a very comfortable natural environment and a manmade site of relaxation, composed of garden, architecture and many superb art pieces and traditional craftworks.” 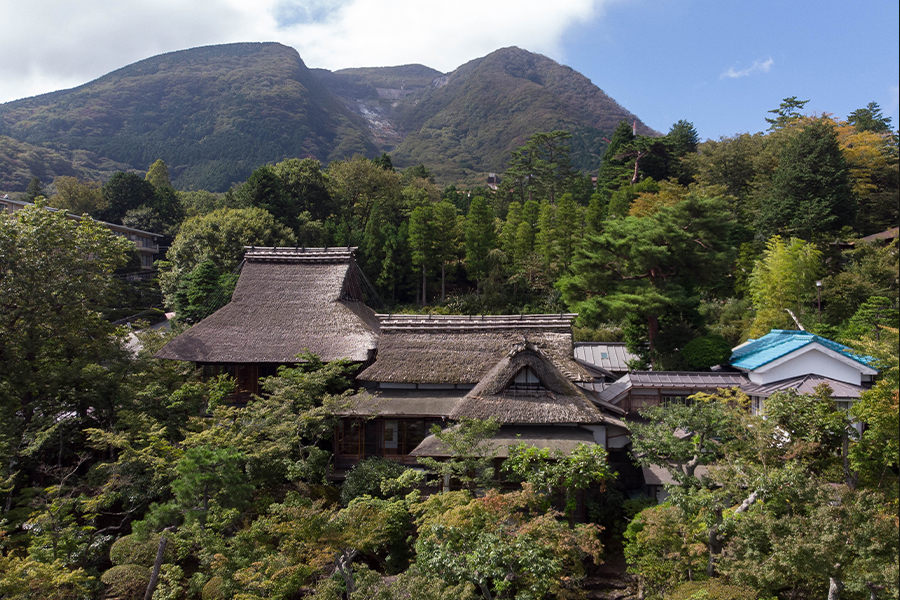 Meishu-sama’s first residence when he moved from Tamagawa, Tokyo to Gora, Hakone in 1944 is “Shinzansô.” He carried out the construction of Shinsenkyô from here.
At the same time, Meishu-sama used the Upstairs Room of the Shinzansô for meeting with the followers, used the Jôrei Room to administer Jôrei to people who are suffering, and used the Western-Style Room for receiving guests.

Characterized by the architecture making use of the boulders and the Western-style building in the shape of a ship, it became a Registered Tangible Cultural Property of Japan in 2001, as a rare architecture of the early Taisho era’s holiday home architecture preserved to this date. 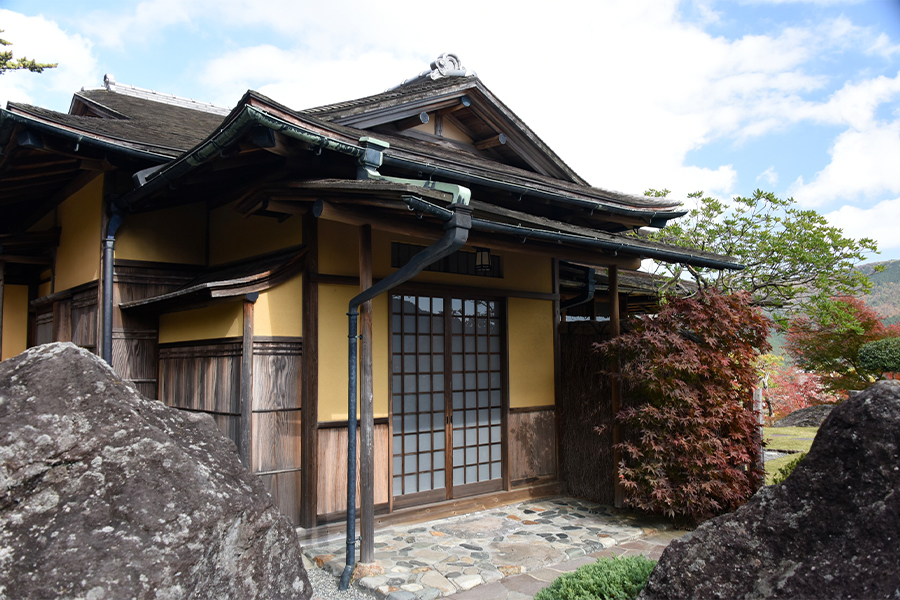 The first building Meishu-sama constructed after he moved to Gora, Hakone in the center of Shinsenkyô is “Kanzantei.” As its name suggest (mountain view house), from inside, you can view Mount Myojogatake (Daimonji mountain) in the east, along with Mount Myojingatake and Mount Asama in the south.

It is an architecture about which Meishu-sama stated, “I will be using this Kanzantei for my work. The sooner it’s finished, the more humanity can be saved.” With such commitment, even under the harsh conditions of during and after the WWII, it was successfully completed in August 1946. It was used for meetings with many people, and he worked on the dictation and editing of many teachings as well. 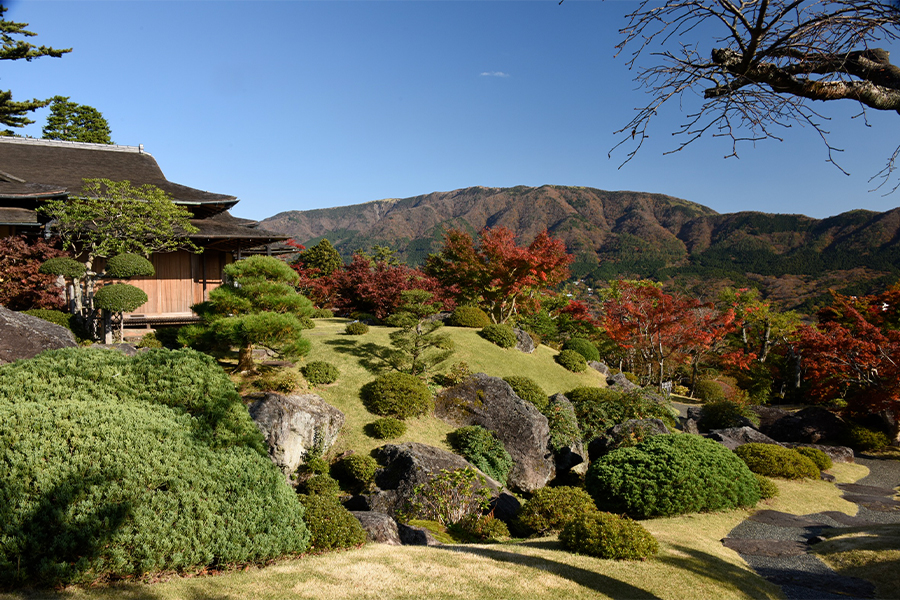 Sekirakuen garden is made of outcropping boulders and the stream interweaving such boulders. The rock arrangement in the stream, and the many boulders in the garden of Kanzantei were placed skillfully making use of the landscape, creating a unique atmosphere.

All of the rocks were on the land from the start. By encountering the fact that every time Meishu-sama wanted a certain rock on a certain spot, exact kind of rock would dug up from the nearby area, he said that God had been preparing this land from the ancient time.

One can enjoy the beauty of open space scenery of the garden combined with the distant view of the mountains of Hakone and the Sagaminada Ocean. 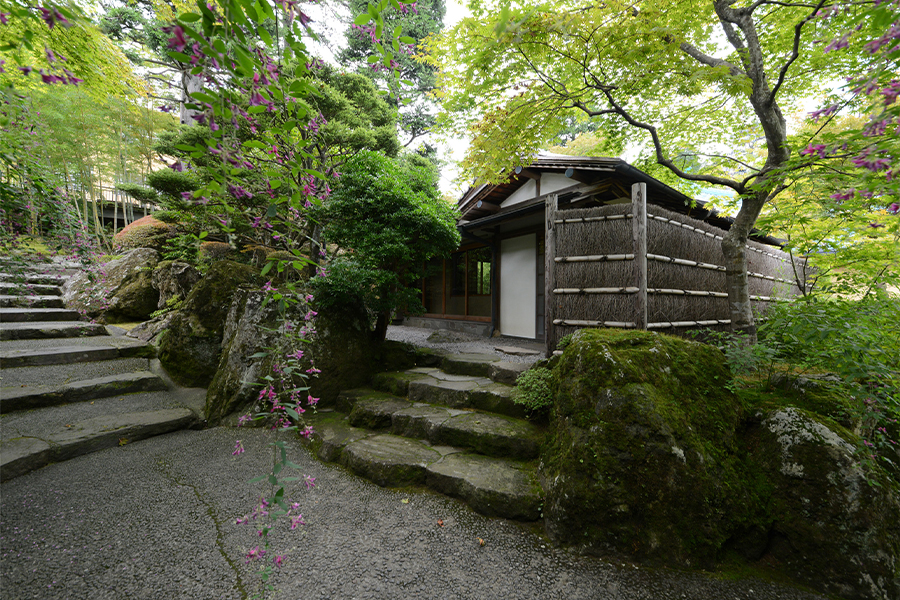 “Haginoya” (bush clover villa) is a former rental villa built in the Gora Park and was moved to the slope behind Kanzantei and repaired. It was first used as a guest house, but later it was used for writing calligraphies and “Ohikari.”

“Hagino-michi” (bush clover path) was constructed in front of Haginoya. The miyaginohagi (type of bush clover) that blooms and covers the arrangement of stones on both sides of the path reaches its peak blooming time from mid-September to late-September, pleasing the eyes of the visitors. Towards the creation of a world filled with truth, virtue and beauty—paradise on earth—the “Hakone Museum of Art” was constructed in order to display art pieces to the public, which had been monopolized by the privileged classes at that time. Meishu-sama’s desire was to entertain the people in the world through beauty and contribute to the advancement of superb culture. Meishu-sama designed the architecture himself, and it is characterized by the exterior with the Chinese-style blue tiles and the design of the Japanese room on the third floor. Followers volunteered in its construction, and the museum opened in June, 1952.

The artworks displayed were the ones of high artistic value, which speaks to the viewers’ souls, collected by Meishu-sama himself. Though many masterpieces of Japan were sold to abroad during the chaotic time after the WW II, he helped its prevention and the contribution for the protection of cultural assets. Many intellectuals highly praise this accomplishment.

Such art pieces are stored and displayed at the sister museum, MOA Museum of Art in Atami City, Shizuoka Prefecture today. At the Hakone Museum of Art, Jomon earthenwares, jars and pots of the Six Ancient Kilns produced in the Kamakura and Muromachi periods, and Japanese pottery up to the Edo period are mainly on exhibition. They have special exhibitions as well. 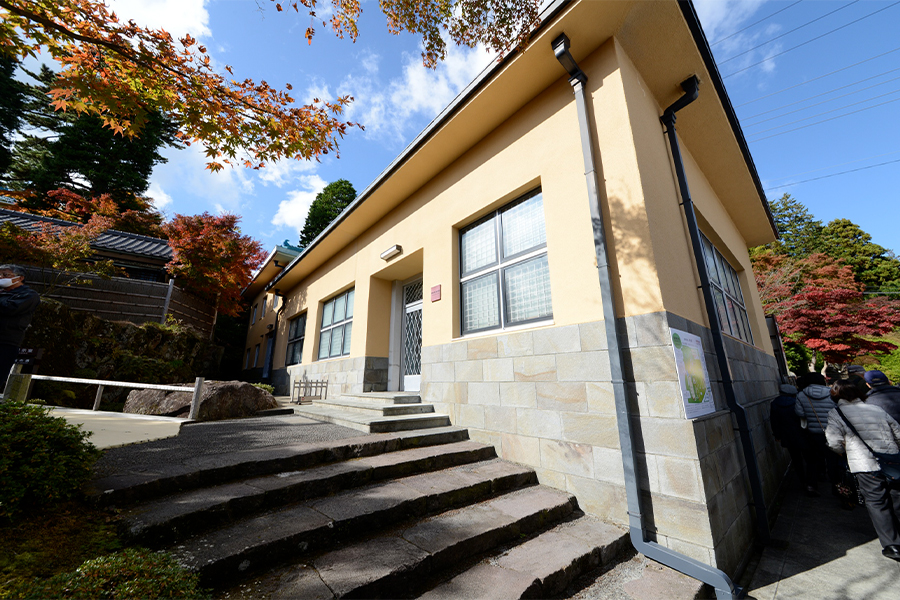 The “Hakone Museum of Art, Annex” was constructed from November 1952 through May next year, on a landscape with difference in height, between the Haginoya and the public road. It is given consideration so that the exterior wall of the architecture is not too assertive when looking at it from the outside and from the garden.

At present, it introduces Meishu-sama’s life and enterprises, and Meishu-sama’s paintings and calligraphies are on display as well as the artworks of contemporary artists. 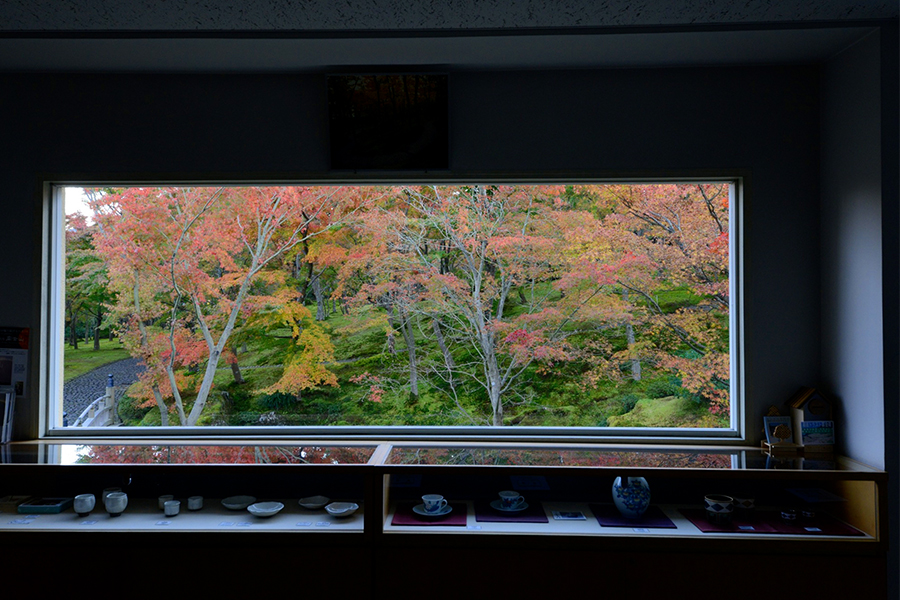 Located at the entrance of Shinsenkyô, it is the building with the ticket office and the museum shop, Kohrindô. There are 3 large windows on the south side, and from inside the building, one can enjoy viewing the scenery of the stream on the northern side together with the moss garden. Meishu-sama himself enjoyed the moss garden from here on rainy days. 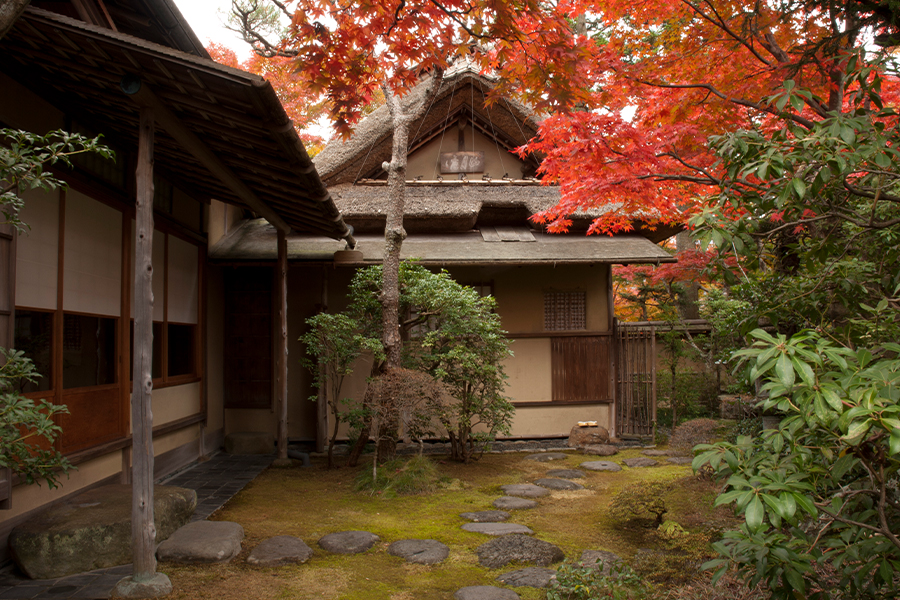 The “Sangetsu-an” is a renowned tea house which, under Meishu-sama’s instructions, the 3rd generation master teahouse carpenter Seibei Kimura had completed in 3 years. It was constructed with the wish to spread to the world the wabi-sabi of the world of chanoyu (Japanese Tea Ceremony) and the beauty of architecture unique to Japan.

The ceiling of the koma (a small tea ceremony room) is a coffered ceiling made with small logs of Japanese Red Pine; Japanese black persimmon, paulownia, and bush clover are featured in the spaces; each part of the teahouse is made with carefully selected materials; and it is a high-toned teahouse. 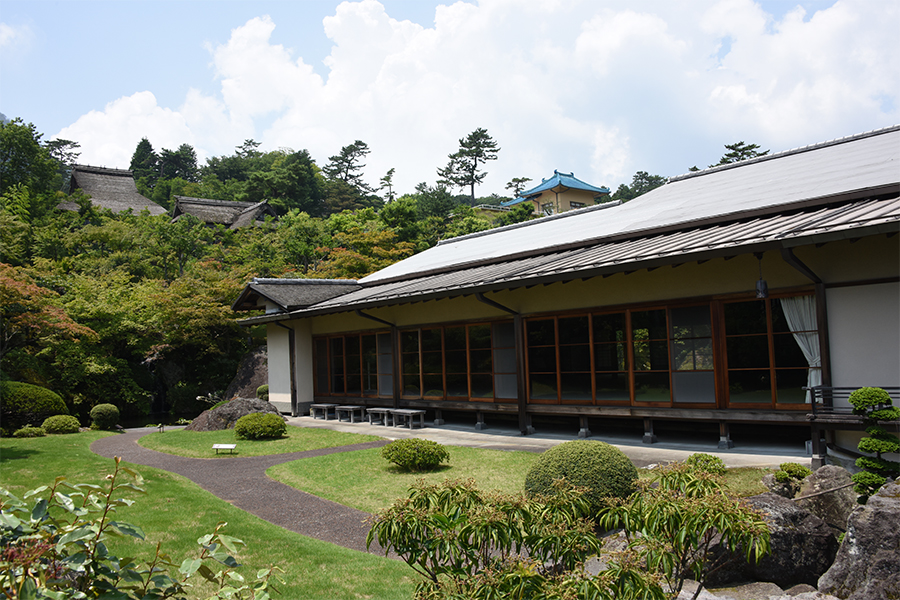 The “Nikkoden” (Sunshine Hall) with a shake roof was constructed with Akita cedar and other materials. At first, it was named “Sôunryo” (Sôun Dormitory) after Mount Sôun on its back. However, it was renamed in 1950, and with the easing of regulations, it was remodeled and extended in the following year.

Sukiya style architect, Isoya Yoshida designed the architecture which fits up to 1000 people. The Ryuzu Falls is arranged in the northeast side of Nikkôden, and from the front garden, one could view the pond with a boulder over 70,000kg and the waterfall, the thatched roof of the Shinzansô, and Mount Sôun as one scenery. 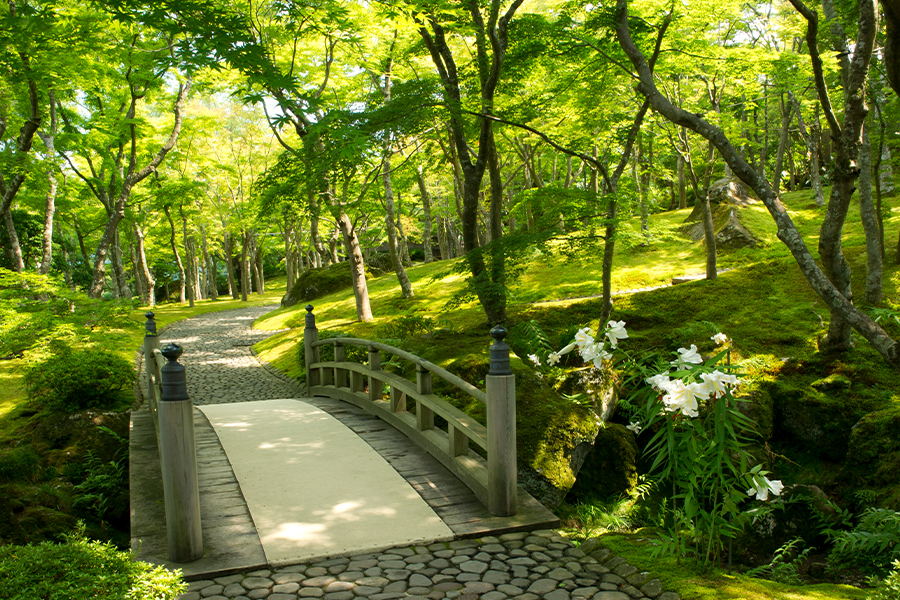 At the time of construction, there were approximately 120 kinds of moss in the Moss Garden, and about 170 maple trees were arranged. At present, more than 30 kinds of moss that adapted to the environment color the garden green, and its walking path has the appearance like the Korin Waves. The moss was donated by followers from all over Japan who had been saved by Meishu-sama and inspired by his vision. It is filled with their sincerity of wanting to support Meishu-sama’s will.

The garden blanketed in snow is beautiful in the Winter, the tender green sprout in the Spring, and the contrast between the green of the moss and the red maple leaves stand out in the Autumn. It is a garden where one could enjoy many different expressions. Especially, the season of autumn leaves is introduced many times on TV, and visitors make a long line. 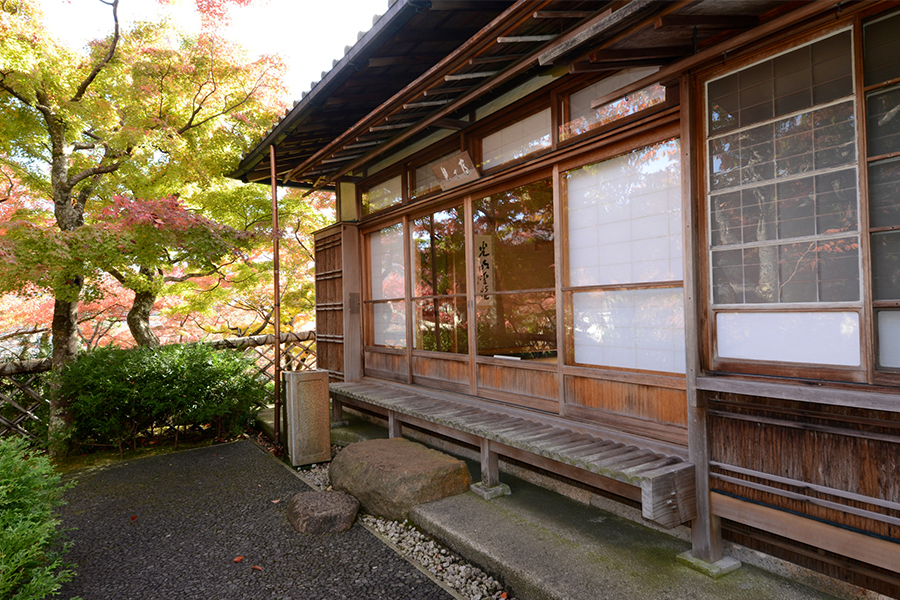 In 1935, Meishu-sama inaugurated the Japan Kannon Society (present Sekai Kyusei Kyo) at the temporary headquarter in Kojimachi, Tokyo. In October of the same year, he purchased a house whose property is about 2.4 acres in Kaminoge, Setagaya-ku, Tokyo and moved the headquarters there. He named the site, “Gyokusenkyo” and he advanced the Divine Work from here afterwards.

In October 1936, he built a house in the southwest area of this large property, where Mt. Fuji could be viewed, and named it “Fujimitei (Fuji view lodge).” From that time until April 1944, he lived in this house and carried out activities such as the writings of the Divine Scroll and “Ohikari” and giving guidance to executives and disciples. It was the first building he built since the establishment of Japan Kannon Society.

In 1955, the Fujimitei in “Gyokusenkyo” was dismantled, and was preserved with its architectural blueprint. Then, it was rebuilt within Shinsenkyô in Hakone in 1974. Like the Haginoya, “Kagetsutei” is a former rental villa which was in the Japanese garden in Gora Park. It was purchased in 1947, renovated in 1949, and was used as a resting place for the followers. It is located in the southeast part of Shinsenkyô, in the far back of the arrangement of stones in front of Nikkôden. 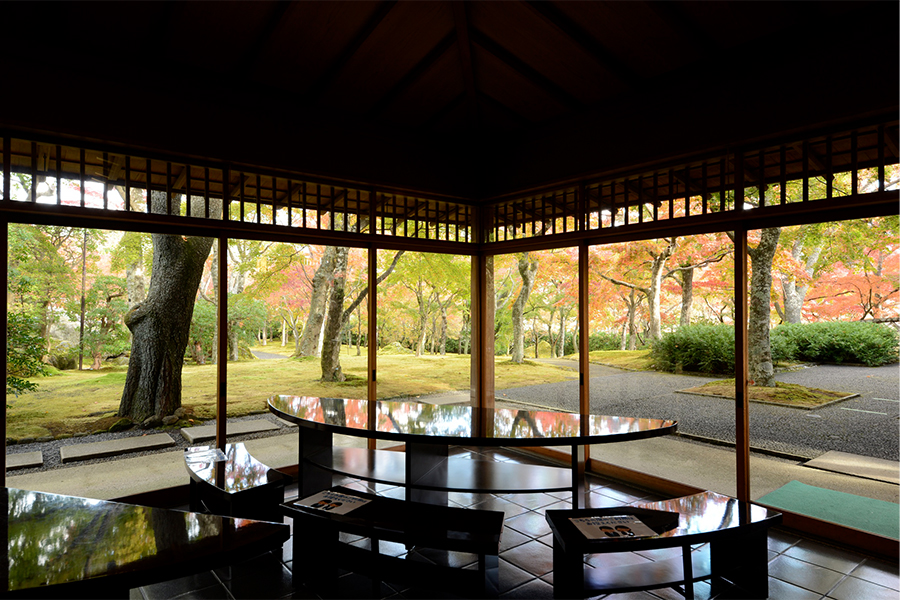 This is a teahouse where matcha green tea is offered with tea ceremony performed with tables and chairs, facing the Moss Garden. One could enjoy matcha while enjoying the beauty of the garden of each season.
Time open: 10:00~15:30 Going further along the Haginomichi path, a garden expressing the sensitivity of Tan Zhirui with the actual bamboos and rocks appears. It is a bamboo garden completed in June, 1951. One could get glimpses of the main building of Hakone Museum of Art beyond the garden, which is one whole scenery. It is a place where the green bamboos and the red maple leaves are in beautiful contrast in the autumn.

About the Grand Renovation