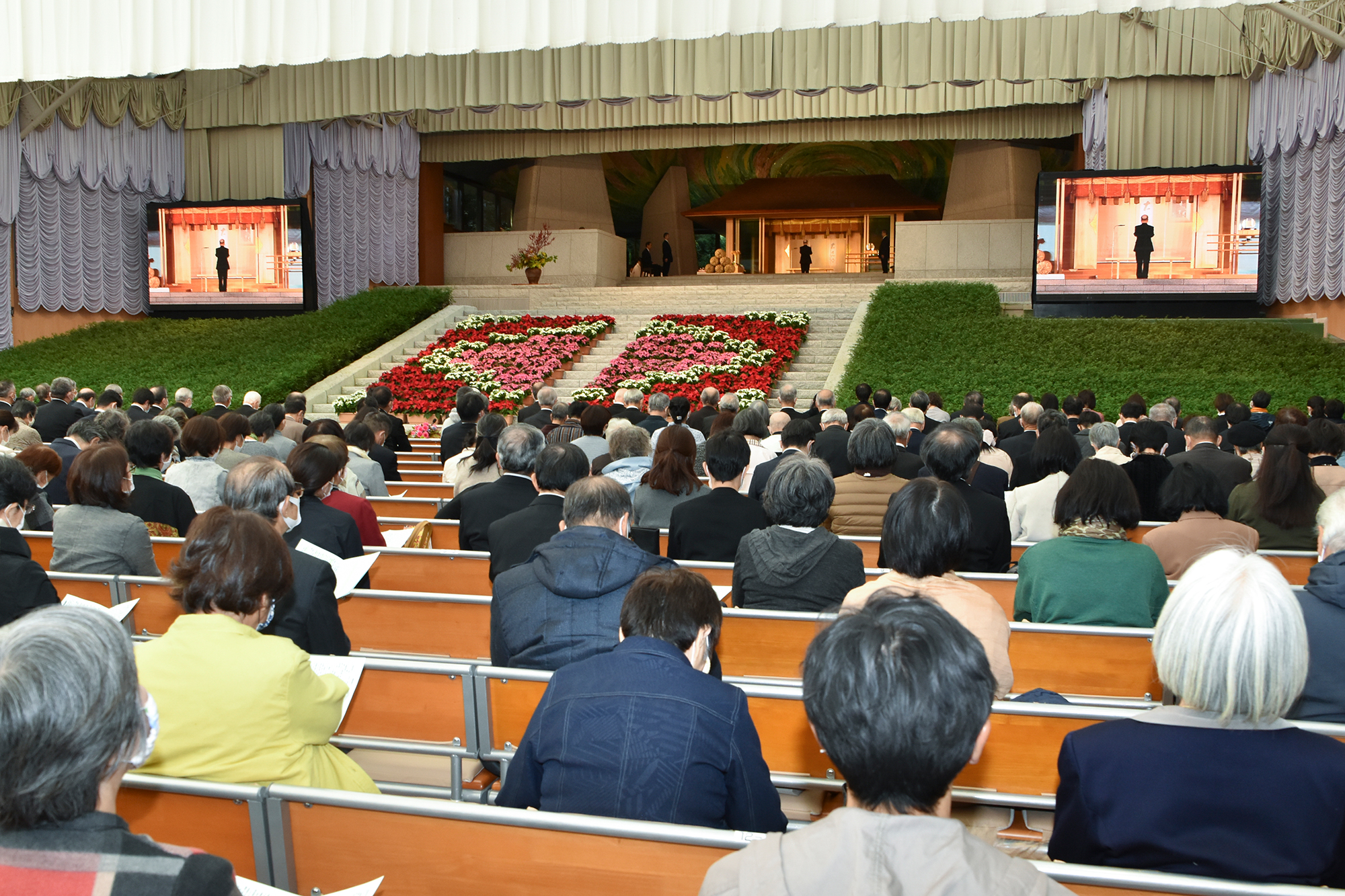 It is a commemorative day when Meishu-sama founded the organization in 1935. It is a day to meet with Meishu-sama in thinking about Meishu-sama’s will behind his inaugural message of “Creation of a World of Great Bright Light,” which disclosed the grand-scale vision of salvation of humanity and construction of paradise on earth. It is a day when all followers renew the pledge to participate in Meishu-sama’s divine works.

Risshun is a turning point. From this day, the Light becomes stronger, and the Divine Plan advances further. In addition, February 4, 1928 is the day when Meishu-sama entered a path of entirely devoting himself in the Divine Work by realizing the graveness of his mission.

It is a Gomenkai day when we give our thoughts to such significance of Risshun including its history and renew our vow of serving for the Divine Plan.

On this very day in 1955, Meishu-sama had ascended, became the presiding deity of the Shibikyû at the uppermost place of heaven, and is advancing the Divine Plan in the three realms of the divine world, spiritual world and the physical world.

On this day, we call the ancestral spirits who are working closely under Meishu-sama, and together, we make our vow in working for the Divine Plan of the salvation of humanity and construction of paradise on earth.

Days of Prayer for Abundance (November)

The Day to Offer Prayers for Abundance in March is a Gomenkai Service in which we place offerings of seeds which are the symbols of life and pray for the healthy growth of all life including agricultural crops and our participation in the Divine Plan.

The Day to Offer Gratitude for Abundance in November is a Gomenkai Service in which we place offerings of newly harvested rice as symbols of the blessings of harvest, and express our gratitude.

They are Gomenkai Services at the time of most mild climate of the year. While enjoying the superb beauty of Shinsenkyô, the sacred ground – the prototype of paradise on earth, complete with truth, virtue and beauty, we express our gratitude to Meishu-sama who advocated that heaven is a world of art and had proceeded on the beautification of life, agriculture and art, and make our vow to work on its expansion.

The Gomenkai Service is held on the first day of each month.

On June 15, 1953, Shinsenkyô, the sacred ground and the prototype of paradise on earth, to which Meishu-sama devoted himself on its construction, had been completed, and “The Commemorative Service of a Completion of Hakone Paradise on Earth” was conducted for its celebration.

Also, June 15th is a turning point when the phenomena in the spiritual world with its increasing brightness is reflected to the physical world, and many significant prototypes and events of the Divine Plan have been manifested on this day. On June 15, 1931, Meishu-sama received a revelation about the transition from Night to Day. Also, on June 15, 1950, the spirit of the highest deity had settled in the “sphere of light” in Meishu-sama’s abdomen. Furthermore, the Provisional Service of the Advent of Meshiya was held on June 15, 1954.

As you can see, it is the most important day for our organization, and it is the Gomenkai Service where we celebrate all of the above along with praying for the realization of paradise on earth and making a vow for further efforts.

It is a Gomenkai Service in which we vow to Meishu-sama for making further efforts in serving Meishu-sama’s Divine Plan through the united work of the divine, spiritual and the physical worlds, by inviting the spirits residing in the Shibikyû to the Komyô Sanctuary.

At the same time, we express our gratitude to the ancestors we have invited for their great protection and guidance every day, and pray to them so that we can further serve Meishu-sama.

December 23, 1882, the exact time the winter solstice has ended and the very first day of the recovery of light, Meishu-sama came into this world at the very east point of the world, at Hashiba, Tokyo, as the “Light from the East.”

At the “Advent Service,” those who admire Meishu-sama gather from inside and outside of Japan to celebrate the birth of Meishu-sama and we renew our resolution to serve for the “construction of a world free from illnesses” and “the creation of a new civilization.”

*Gomenkai Service is held in May, July and September as well. (On the first day of each month.)