Information on the Komyo-dai in Hakone 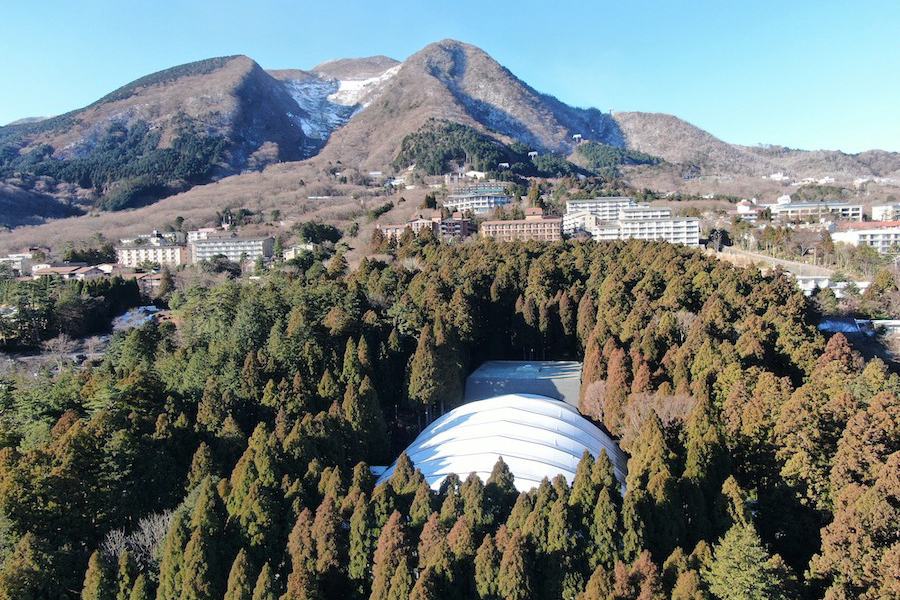 Komyo-dai is located in the center of Gora, Hakone.

“We will become global when the head temple is completed .”
“That place is the very center in the spiritual world of Japan. It is the middle point of east and west. It signifies that the bright light shall appear at the center of the spiritual world.”
“Spiritually speaking, it means that the light has appeared in the middle of the world.”

It is a place with such profound meaning as Meishu-sama taught us so.

In addition to the worship facility “Komyo sanctuary / Temporary Komyo Kaikan”, there are facilities such as the mausoleum of the founder Meishu-sama and “Shibikyu”, a facility where all ancestral spirits are enshrined. 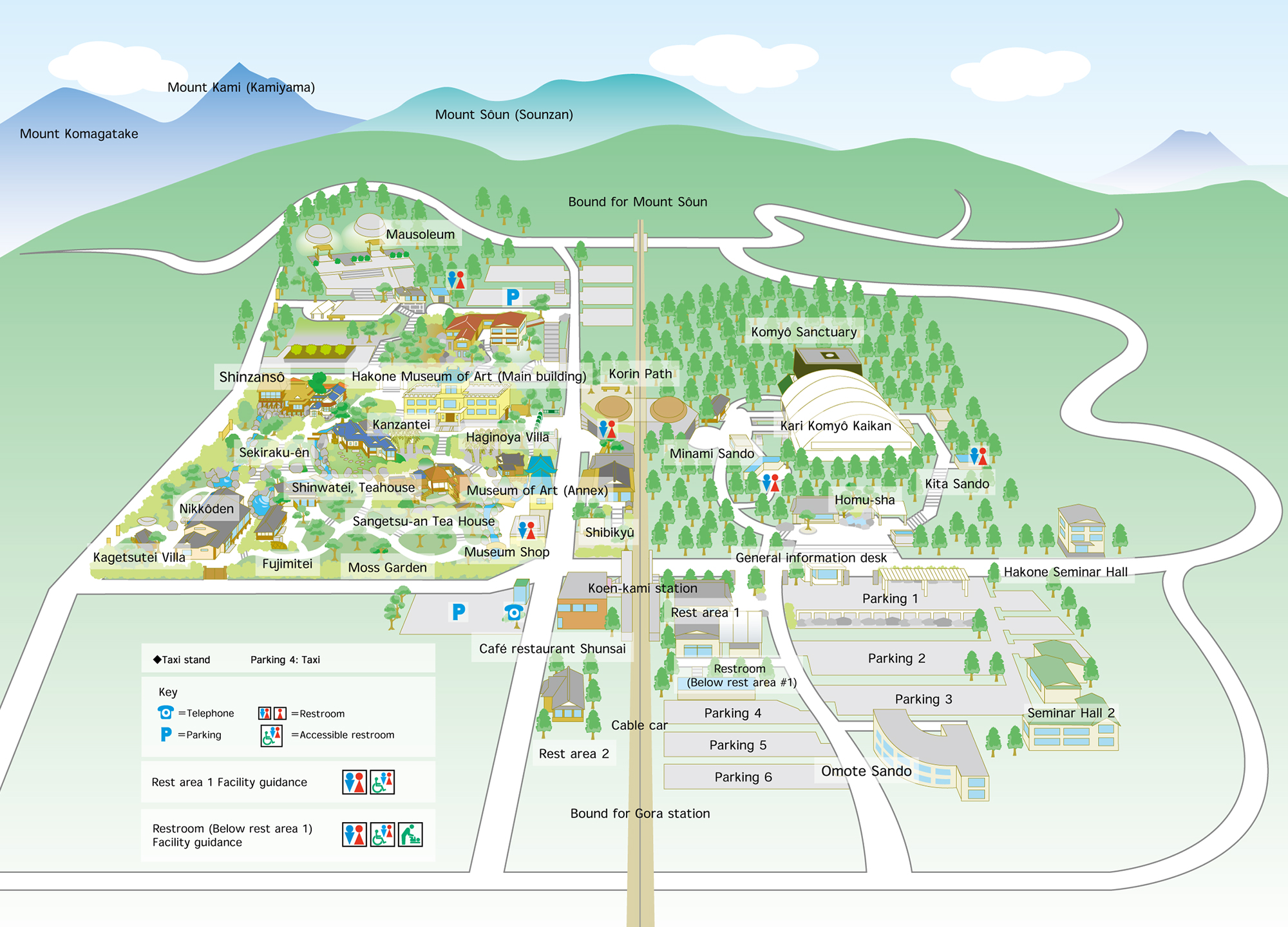 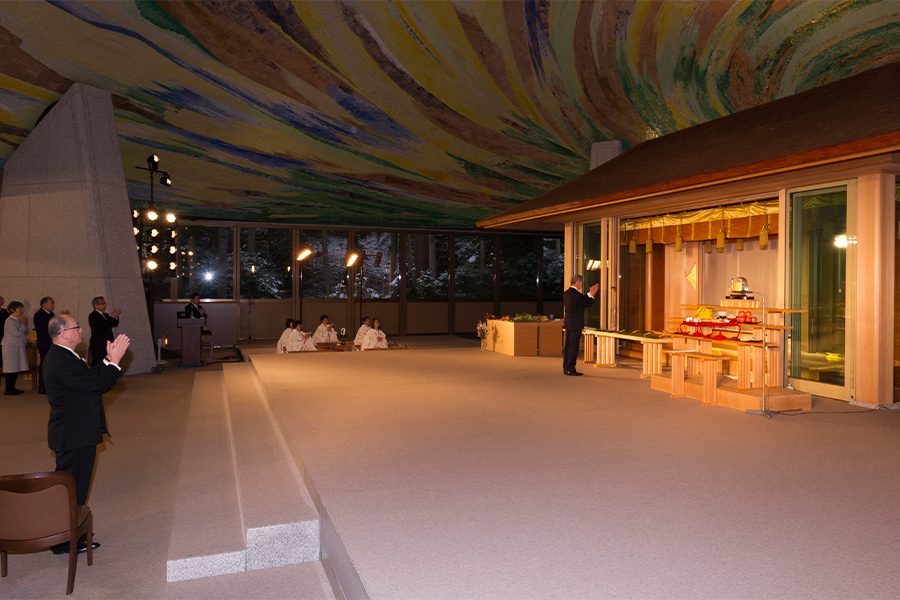 At Komyo-dai, there is Komyo Sanctuary, which was completed in 1971, and our monthly service called “Gomenkai”(meeting with Meishu-sama) is held here. Many members from all over the country gather at the temporary Komyo Kaikan, which is an adjacent facility for Gomenkai service. By receiving Light and Power from Meishu-sama, Gomenkai is the source of power for our advancement and miracles. Each time, we renew our pledge to serve in creating a society free from illness, poverty and conflict, and filled with health, prosperity and peace. A “special prayer” for protection in an emergency is also conducted here.

Any person can visit and pray at the Komyo Sanctuary / Temporary Komyo Kaikan on days other than Gomenkai days. In the manner of our prayer, we make one light bow and two deep bows followed by the three times of clapping before reciting Zengen Sanji prayer and the “God’s Name” (“Miroku Omikami” and “Meishu-no-Mikami”) created by Meishu-sama. Meishu-sama taught us that “the surrounding spiritual world will be purified to a great extent when one recites the Zengensanji prayer.” Reciting of Zengen-sanji prayer at the Gomenkai at the Komyo Sanctuary, which is the spiritual center of the world and the center of God’s Divine Program, is also a great purification of the whole world.

《Opening Hours》 8:00-16:30
* Opening hours may differ, such as during the holidays of year-end through the New Year and during the Gomenkai services.
* To prevent the spread of corona virus infection, we ask you to wear a mask and disinfect your hands when you enter. 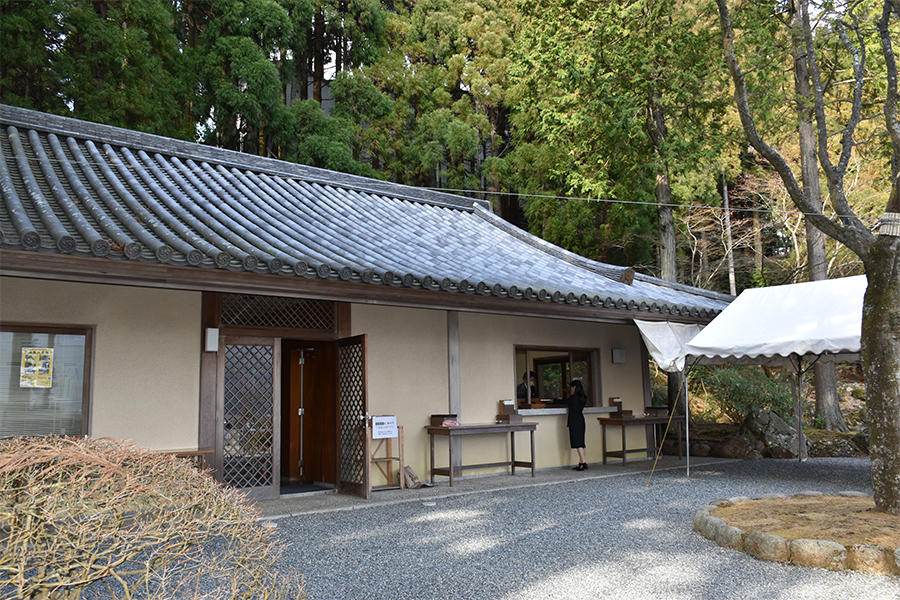 There is an administration office at the entrance of the Komyo-shinden / Temporary Komyo-kaikan. The office is used as a security base for the entire precincts as well as a place to accept written prayers and monetary offerings. 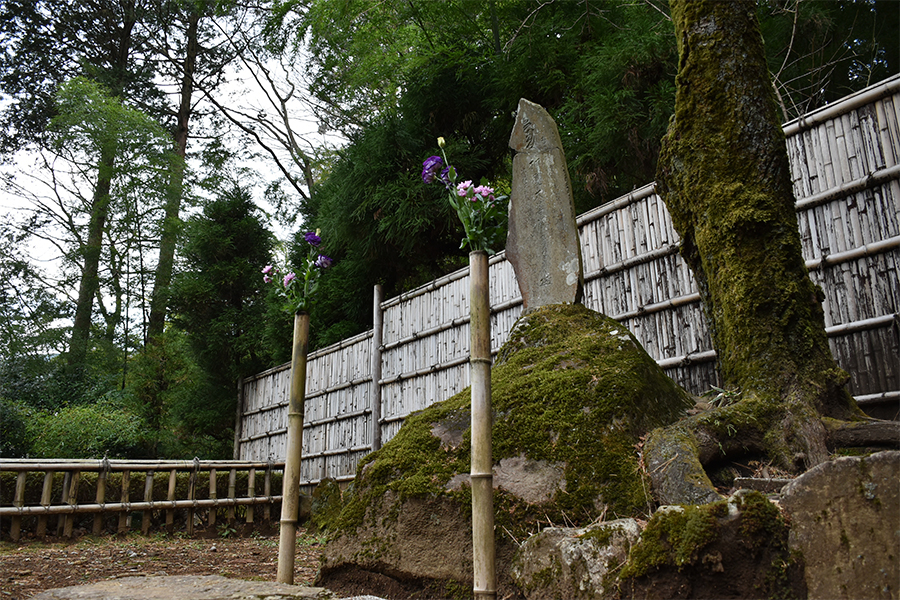 Shin-no-gyoja (Shinpen-syonin, Yoshinobu Hayashi) is an ascetic who became the guardian deity and founder of Hakone mountains. After finishing his ascetic training at Mt. Omine in Yoshino, Nara, he entered Hakone in 1881 by receiving a spiritual message from the founder of Shugendo (mountain asceticism), En-no-Gyōja. By enshrining the founder’s spirit on the summit of Mt. Kanmuri-ga-take, he prayed for the development of Hakone. He used his spiritual power to save the people of Miyagino Village at the foot of the mountain when they had any illness or disaster. Therefore, he was respectfully called “Shinpen-san” by the villagers.

Shin-no-gyoja pedicted, “In the future, you will be able to climb this mountain with a convenient vehicle, and it will prosper forever as a scenic tourist spot of Hakone in the world that both men and women can enjoy. Also, based on the request of many people with deep faith, a trans-religious temple and a memorial tower for the people of the world will be built in less than hundred years. “

This monument of Shin-no-gyoja is erected in the Komyo-dai property. Every April, a memorial service is held by the local tourism association, Miyagino district officials, prefectural and town council members and the people of Toho-no-Hikari. 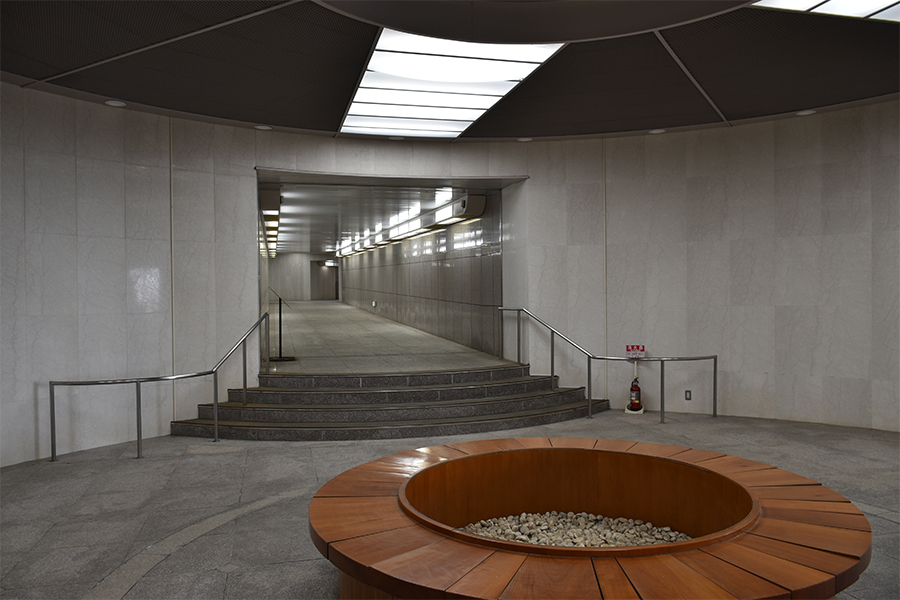 Korin-no-michi is an underground passageway with a total length of 151m that connects Komyo-dai and Shinsen-kyo. It is installed under the track of the cable car, and was completed in July 1996, 43 years after Meishu-sama expressed such concept. In addition to the stairs, escalators are installed in the passageway in order to facilitate the movement of people, giving consideration to the elderly people. 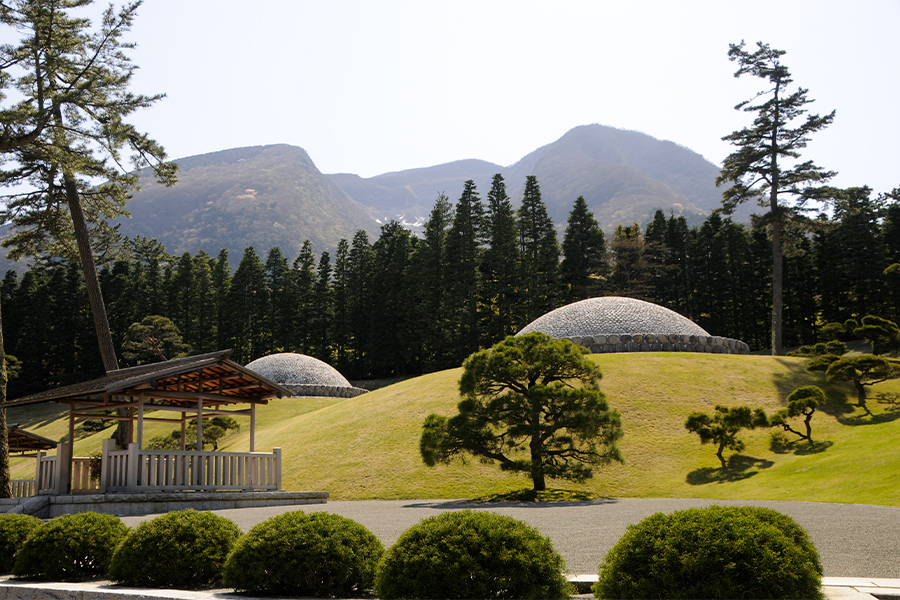 “Okutsuki” is the mausoleum of Meishu-sama. There is a grave of the second spiritual leader (the wife of Meishu-sama) on its left side.

This property was pointed by Meishu-sama during his lifetime when he told his close aide during his lifetime that “there will be my permanent residence there,” and it is located right on the line connecting Shinsen-kyo (the prototype of paradise on earth) and Mt. Kamiyama, which Meishu-sama said is the center of the world. It truly is a place designated by God.

This sacred area overlooking Hakone somma, such as Mt. Myojogatake, which is known for its Daimonji-yaki bonfire, has a Rimpa design that was favored by Meishu-sama. Members visit Okutsuki and ancestral shrine before or after visiting the Komyo Sanctuary for offering prayers.

“The Service at the Mausoleum” is conducted on February 10th, the day Meishu-sama ascended to heaven.

《Opening hours》 9:00-16:30
* Opening hours may differ, such as during the holidays of year-end through the New Year and during the Gomenkai services.
* To prevent the spread of corona virus infection, we ask you to wear a mask and disinfect your hands when you enter. 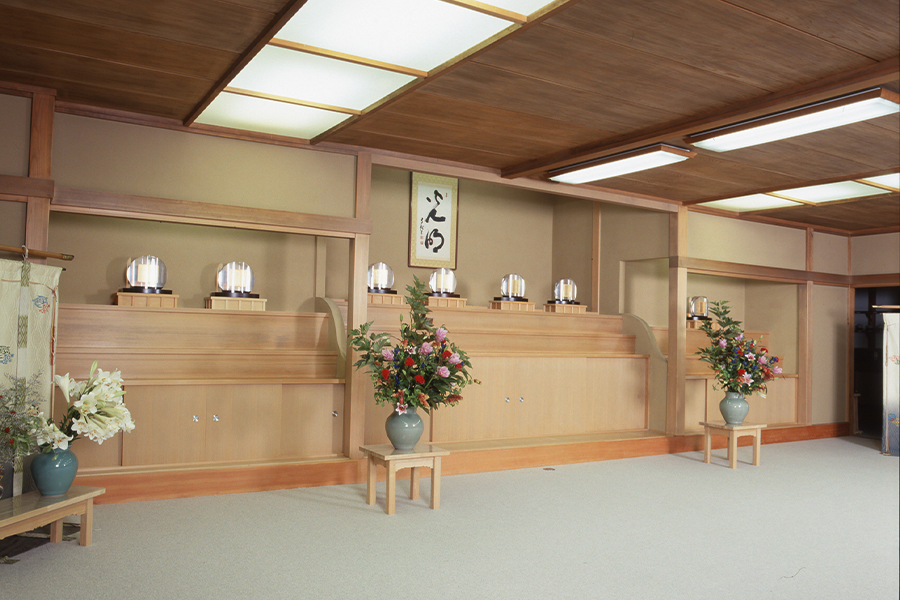 At “Shibikyu,” we enshrine all the spirits who we want them to participate in the divine work.

Meishu-sama who ascended to heaven became the presiding god of the Shibikyu and advancing the divine work in the three worlds: divine, ancestral and physical worlds. At Shibikyu facility, services of offering “gratitude and prayer” to all enshrined spirits are being held so that the ancestral spirits in the spiritual world and us in the physical world can participate together in advancing the divine program as one.

《Opening hours》 9:00-16:30
* Opening hours may differ, such as during the holidays of year-end through the New Year and during the Gomenkai services.
* To prevent the spread of corona virus infection, we ask you to wear a mask and disinfect your hands when you enter. 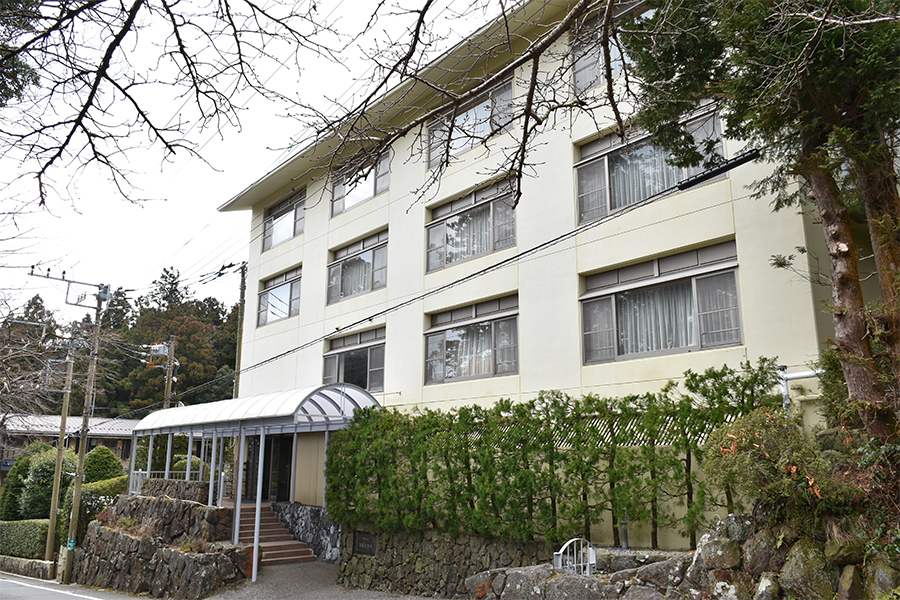 About the Grand Renovation